Valley of the Sun Casual Club
Welcome to VOTSCC . Please enjoy the many features . You may login at anytime to be part of our community .


VALLEY OF THE FUN

If you wanted to look at the Magic Star . You will see that it is in the forum F6 . If you click F6 you wiil see just those 12 forums . Then you can look in each one at all the topics in them .


F12 ANYTHING ELSE ?
DAVID LANES KICK ASS GALLERY OF ART
FORUM OF OLD WGT FORUM POST'S (archives)
HEY JOE
OFF THE WALL , THX FOR A WALL OF A GOOD TIME
Gallery
Click on Gallery in toolbar above to see Galleries
FORUM UPDATE
THIS FORUM IS FOR YOU ALL . PLEASE FEEL LIKE IT IS YOURS . READ THE FORUMS. POST COMMENTS . ASK QUESTIONS . IF YOU HAVE A COMPLAINT POST IT . MAKE SUGGESTIONS . READ SOME TUTORIALS . READ SOME GOLF TIPS . CHECK RECENT TOURNEY WINNERS . BROWSE OUR OLD FORUM ARCHIVES . LOG IN TO THE CHAT AND MESSAGE SOMEONE TO MEET YOU THERE AND ARRANGE A MATCH . LOG IN TO THE CHAT TO SEE IF SOMEONE IS THERE JUST TO SAY HI . MESSAGE ME IF YOU WANT TO GET ON THE DAILY BLITZ .
KWIK KLIK TO YOUR FAV FORUM
DAILY BLITZ SCORES ONLY
DONT CHOKE IT JOKE IT
FORUM OF HOW TO'S

THE BLITZ SCORECARD IS ON Page 3 PLEASE CLICK HERE
TO FIND THE COURSE OF THE DAY AND SEE
THE WEEKLY STANDINGS . PLEASE POST
YOUR SCORES HERE. IN THIS
FORUM POST YOUR BLITZ SCORES HERE.


VOTSCC LINK
http://www.wgt.com/clubs/home.aspx?id=148446
Bilko’s Putting Calc
Here is a link to Bilko's Putting Calc and Wind Calc
Just download and install
Owner’s Objectives
It's been a while since I expressed some of my objectives for the CC . First of all I like and respect everyone that joins our club . I realize that not everyone knows what a CC is all about . Many have different reasons for joining . I really don't know how many of the other clubs are run . They are all different . What I want to emphasize in our CC is that whatever tier you are . That you feel comfortable here , part of a team of players that come here to find conditions that enable them to improve their game , hone their skills , lower their scores ,lower their averages , move up in tiers . Enjoyably and comfortably with the conditions that challenge them enough to keep that drive without the frustrationsof regular game play . All that is completely possible by either creating those tourneys yourself or by messaging me about it . Or someone else in your tier that has been creating tourneys . Any kind of information that you need to know should be provided here , any kind of appp , calculator , help , tutorial , tournament , statistic , message , opinion , gripe , compliment , etc , etc . Should able to be aqcuired here ( or in our website , as it may be easier there ). With your help , all of this can be done easily . We already have a good start . I am going to be here for a very long time trying to achieve all this . For any of you that think it's a good direction for your CC to go in . Then lets keep on keepin on . Sincerely , Your Co team member PDB1 , Paul ( sitting here on a rare rainy day ) May the SUN always be with you
POST OF THE WEEK
Re: Where are the Flags ?By Bertasion in Valley of the Sun Casual Club The other day upon the heather fair I hit a flagstick that was not there. I saw it's shadow and heard the clank but where it stood was just a blank. It was not there again today. I wonder when it will come back and stay. Brian
BLITZ LIST
HERE IS THE LIST OF BLITZ COURSES IN THE ORDER THEY ARE PLAYED EVERY WEEK OF EVERY SEASON .

Valley of the Sun Casual Club :: UPDATE FROM THE OWNER

Considering what Karen and I went through last year . We really thought we had weathered the storm and gotten through a nightmare we never saw coming . We thought it could only get better . Until we received 2 new pieces of paper this week .

Here it is 13 months after my Left Shoulder Reverse Arthroplasty . ( shoulder replacement ) . 13 months since we were evicted from our home . 19 months since my injuries were so bad I had to stop work . . 1st surgery was 1 month later . A shoulder repair that failed . Leading to the prosthetic shoulder .

For the first 5 months after I tore my left shoulder on September 21st 2017 . My employer pushed it aside . Ignoring me . I continued to work . Stating my pain regularly . On a friends advice after 4 months . I filed a claim with the Industrial Commission of Arizona , ICA . My employer took notice then . First they tried to deny it to me that it happened on their job . But when they realized I had been telling them all along . They got more supportive .

My employer told me that they would take care of everything . Medical bills , Wages from lost work , and more .

Then the ICA hearing started . I got a good lawyer . So I thought .

My lawyer advised me to decline . He said I would get much more than that . He said that he doesn't take cases he doesn't win .

I went along . But I didn't like the way he tried to control my testimony . What I could say and what I couldn't . He said we would win .

I thought there was no way we wouldn't . Cut and dry . Open and shut . No reason for worry .

The final decision FINDINGS AND AWARD FOR NONCOMPENSABLE CLAIM . 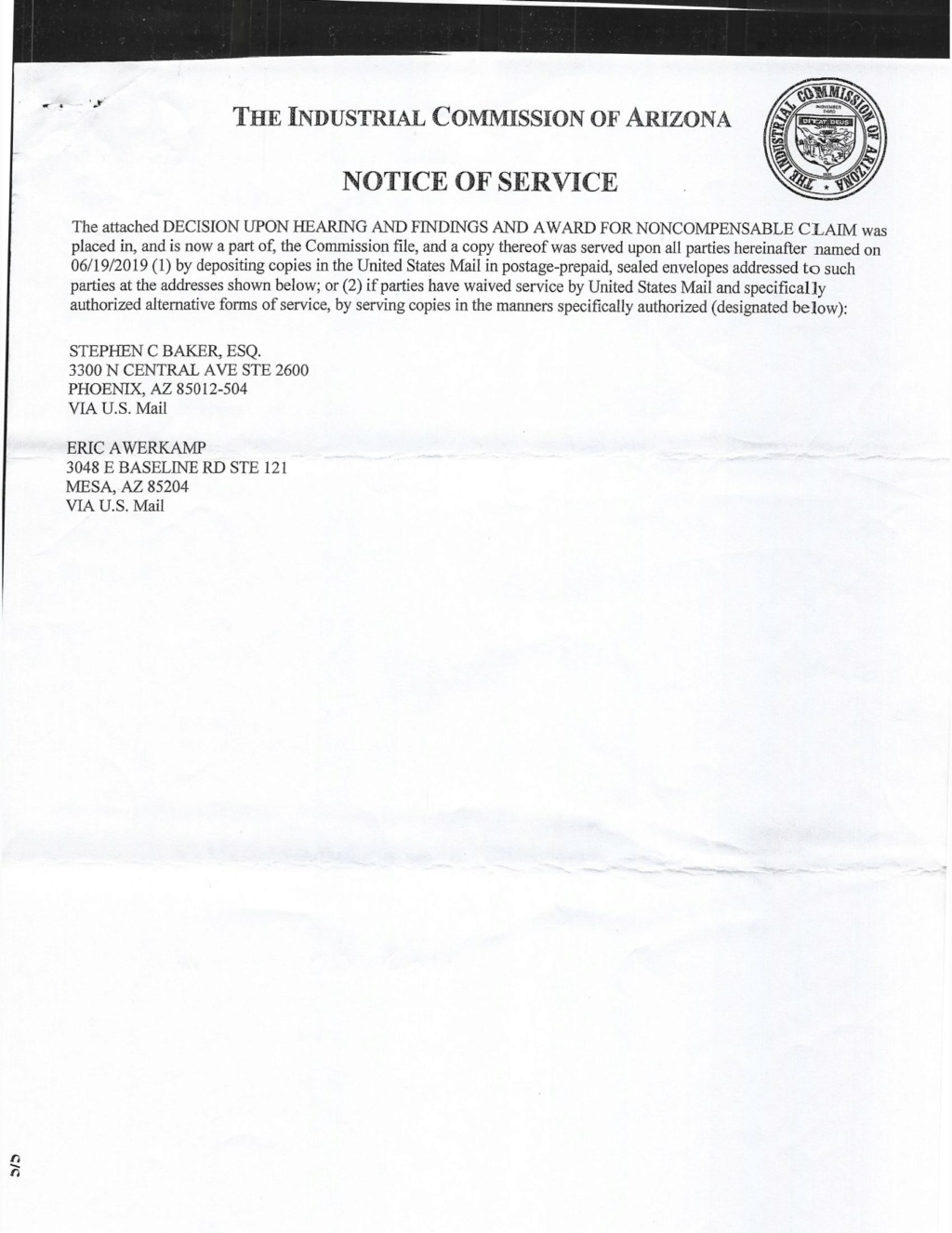 I get nothing . Nothing for the injury that caused me to lose my left shoulder . Nothing for the year and a half of pain and medical . Not able to work . With no income . Living in poverty . Barely hanging on .

On the 9th I went down to Mountain View Medical Center . To get my EKG , chest x-ray , and blood work . For my scheduled Right arm rotator cuff repair . An injury from 2016 . That was as serious as the left arm . Was getting therapy for it and was about to schedule surgery for . When the left arm accident occurred . The right arm got put on hold .

After my physical therapy for the left arm was over . I returned to a low paying , maintenance electrician job . Which allowed me to pace myself and try to manage the dislocations and tenderness of my left arm . And the ever increasing wear and pain of my right arm .

By April 15th 2019 . The day that new owners took over my work place . The managers , the plumber , and the electrician ( myself ) were let go , fired . We were not needed on their team .

So anyway by then my right arm had been re aggravated to the point I could barely even move it . So I set up the long overdue surgery .

At the same time I was now without a job . I began applying for jobs . Even out of my trade . But with 2 worthless arms and being 60 . No one was going to hire me . I also attempted the Handyman field . And even bonded myself . I could only find very small jobs . With clients that had only $20 , $40 , or $60 to pay for labor . Not nearly enough to pay my rent , gas , phone .

Not for lack of trying . I was and not finding any gainful employment .

My heart sunk to its lowest that I thought it could go today . July 11th 2019 . When the landlord knocked on the door . And handed me a 7 day eviction notice . 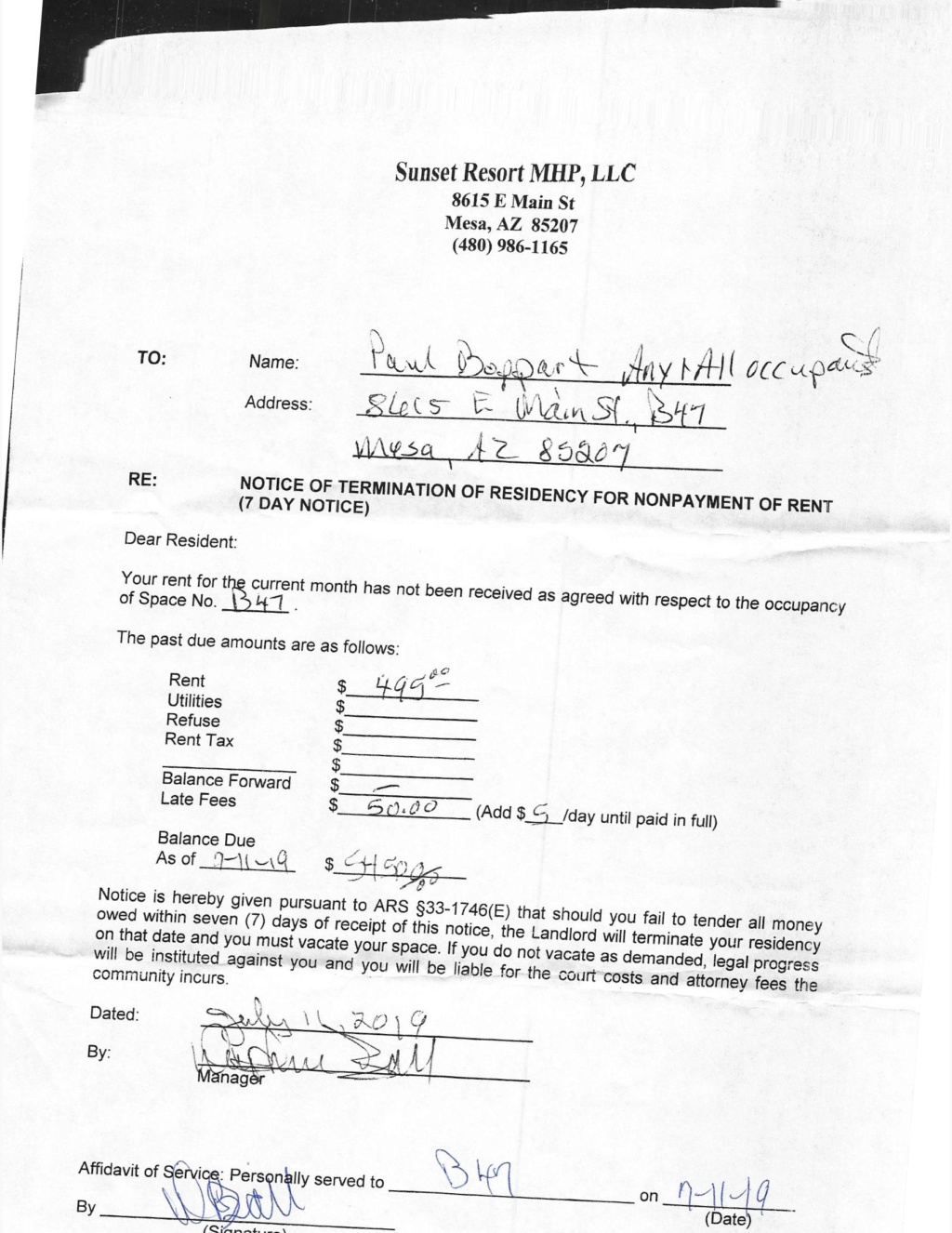 Which is doubly bad . Because we only purchased this very nice mobile home . Just a few months ago . We aren't even done unpacking yet . Even though it is my trailer . Upon eviction . The park will take over ownership . We will get nothing except gone .

So my thoughts are that I absolutely have to continue with the surgery . If it is successful . I will be able to put this medical nightmare behind me forever I hope .

Last year we were evicted on the day of my left shoulder replacement surgery . June 15th 2018 . We had 2 friends help us move . Another friend rented a POD for us to keep about 1/10th of our belongings . Another friend paid for 1 week at the cheapest weekly in town . Bless those 4 friends . We were sure lucky to have them .

This time we got no clue what to do . We gave away the crates and tubs that we emptied when we moved in here . And Poor Karen has just barely got her living room in order . There are 3 hutches completely packed with figurines and knick knacks . Somehow we will have to repack it all . 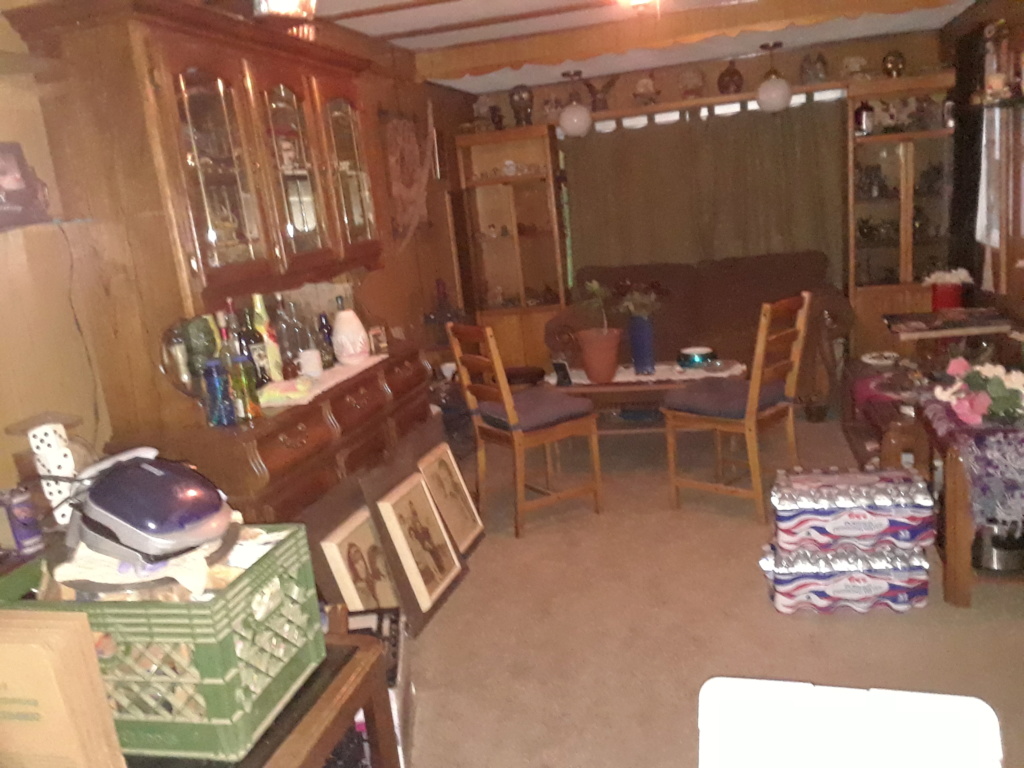 It is a really beautiful place .

How in the hell can this shit happen . Lied to by my exemployer . Lied to by my own attorney . Fired and then evicted from a lowly trailer park . There is no further down we can go . No money . No hope . This time we are truly fucked . How can this even be possible ? We certainly don't deserve this .

I don't know if anyone has wondered what ever became of me . I have pretty much abandoned this wonderful website . I still don't have anyway to play WGT . We have had a few moments of happiness and comfort . But not many .

Not likely anyone will see this but this is my update .

The hospital called to move my surgery time from 10:00 AM to 7:30 AM Monday . But then they called me back about an hour later to remind me to be sure and bring my $650.00 . Well that is the first I heard of it . So I just cancelled the surgery .

Valley of the Sun Casual Club :: UPDATE FROM THE OWNER

» MORE ON COMPLETION AND GAME PLAY

» A WORD ABOUT MATCH PLAY

» THERE HAS GOT TO BE A BETTER WAY

Most users ever online was 107 on Wed 07 Sep 2016, 06:16
PERSONAL MESSAGE WIDGET
TO NEW USERS AND REGISTRARS . PLEASE BE SURE AND DELETE THE USERNAME AND PASSWORD BLOCKS BEFORE YOU REGISTER YOUR NAME . THE DOTS , DIGITS AND LETTERS IN THOSE BLOCKS ARE YELLOW LIKE THE BACKGROUND . YOU WILL NOT SEE THAT . AND WILL NEED TO CLEAR THE BOXES . SO THAT YOU AREN'T ADDING YOUR INFO TO SOMETHING IN THE BOXES ALREADY .
THIS IS A WEBSITE ORIGINALLY DESIGNED FOR INTERACTION WITH ONLINE VIRTUAL GOLF . AND ITS PLAYERS . THOSE GLORY DAYS ARE OVER . BUT STILL CAN BE USED FOR MANY PURPOSES . INFORMATION , ENTERTAINMENT , MEMORIES AND MEMORIALS . SHOUT OUTS , EVENTS , CHAT , COMMON MEETING PLACE . ETC . THE POSSIBILITIES ARE ENDLESS .

I GUESS THEY HAVE A BLOCK ON CHUCK BERRY'S MUSIC . I WILL KEEP TRYING .

This band is legendary

THESE GIRLS CAN ROCK